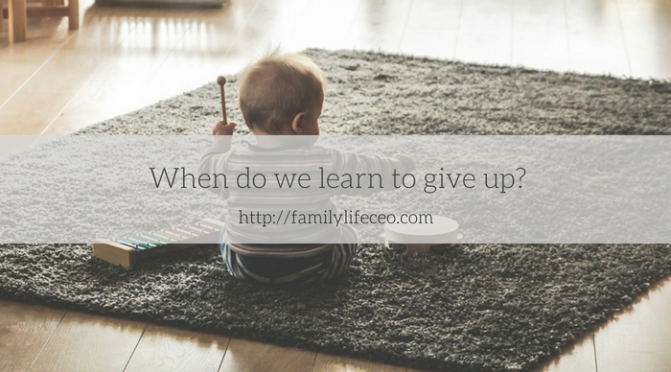 Our 8 months old is now learning to climb onto stuff.

No, let’s start differently — she just learned how to stand up. In the beginning it meant falling 9 out of 10. After a week of diligent practice (and by diligent I mean DILIGENT), she successfully gets up 99 times out of 100. It was truly fascinating to observe her: when it didn’t work she was angry, she was groaning and crying and complaining, but never — NEVER! — did she stop. She didn’t stop her attempts of getting up, saying: “I tried, it didn’t work out, so it’s probably not for me.” She didn’t care about how many attempts she will need, she just had a goal — to stand up and grab a toy dinosaur of her brother. Some 20 attempts later the creature was bitten to “death”; she got him.

Observing our daughter made me wonder: when do we learn to give up? At which point do we stop trying? When do we get that stupid thought: “I must not be made for that”?

Imagine the absurd situation that a child after trying for, say, ten times (which is already a lot in our “grown-up terms”!), suddenly decides that getting up is not for her and ceases all attempts. Unimaginable? Of course. But why do we give up if something that we want doesn’t come to us instantaneously?…

What kills our belief that we will eventually succeed? Is it scores we get in school that tell us where we are strong and where not? Is it comparisons we draw ourselves? I sincerely wonder how do we move from this natural, unstoppable determination in getting what we want to all those doubts about our self-worth, abilities or options available?

When do we learn to give up?

What if we un-learn it? What if we go for our “dinosaurs” with the same level of determination that we all used to have when we were just learning to get up? Without any looking back on our failures and without counting the amount of attempts we made. Where would we get?…

How about: let’s pause for a moment and listen to the voice inside of us. Where does it want us to go? And why aren’t we going there?

What if your success, your desired “dinosaur” is just one attempt away? 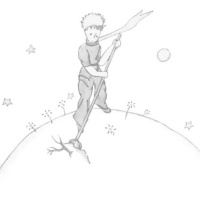